So last year a little game I like to call Stardew Valley came out after me lurking(ie., light stalking) the progress for a good four years. The game may even have been in development longer than that, it was all done by one guy which is kind of mind blowing when you think about it. It’s shamelessly inspired by Harvest Moon & that’s exactly the way I like it. I’m not going to go into the why’s & hows of the games greatness, I’ll leave that for another possible post. Right now this one is all about mods, but specifically witch themed. Currently I’m a non-practicing witch but I still love to incorporate it in most everything I do, even if it’s a little light-hearted. Why not video games too?

All of these mods come from nexusmods, it’s kind of the main place I go to for modding across all games I play. There’s also this place where I’ve found some really unique mods in the past but are not mentioned today. 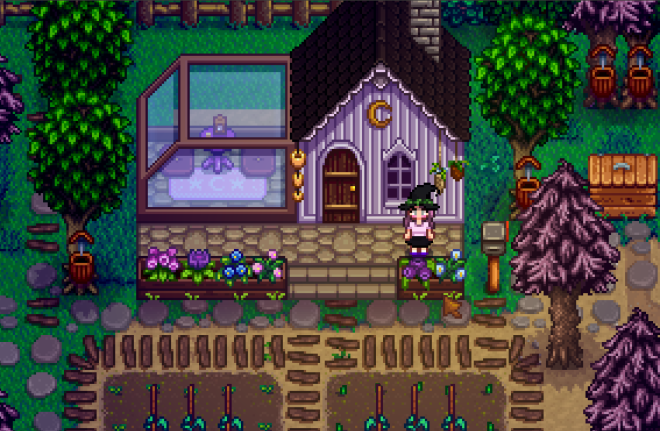 Where the Magic Begins
Witchy-Gothic Buildings by strawberrymilk95 this creator has a whole bunch of mods for SDV that you should check out(maybe even mix n’ match if that’s your thing,) but this one & all the ones I’ll be linking to today have witch in the title, soo–. Since this has been updated for the 1.1 patch it properly mods your shed, mill, & clock etc. Every building has it’s own unique touch, the Slime Hutch even has this gorgeous floral ivy coming down one side of it. The greenhouse with the cauldron behind the glass is my favorite part, only reason I didn’t take a picture of that is because that side of my farm is still really, really fugly. That area just doesn’t know what it wants to be yet, this post may see updates.

Interior Magic
Witchy-Gothic Interior by strawberrymilk95 dreams coming true with a matching interior. This mod makes me look forward to seeing Robin daily to check her furniture stock to see what witchy but undeniably cute things pop up. Not that I need any reason to visit Robin. My favorite part, again not pictured, is the cauldron. I have mine in the kitchen that also gets an appropriate recolor.

The dresser on the right is Get Dressed by jinxiewinxie with dresser recolors by Minakie, a mod that lets you get dressed in your own home whenever you want. After raising your friendship with the Wizard to 4 hearts he allows you to change your appearance in his creepy-ass basement for a cool 500g. Well, you’re a witch now so screw that guy, you can dress your damn self free of charge. Works with every house expansion, even the starter cottage.

Speaking of dressing yourself you’re going to need a hat, because you want to be super obvious about your witch status. The villagers are real chill & don’t treat you weird (unless you’re openly digging in their garbage,) it’s nice. There’s two mods that I know of, Witches Broom & Hat by strawberrymilk95 is a great one with an added option to change your horse into a broom. I use the broom mod for my currently nonexistent horse but Witch Hats by 7yrsofbadluck for my forest witch hat. Strawberrymilk95’s hat is obviously great but I love this newer one for it’s added foliage & flower options.

Bonus Slightly Related Mods
Ali’s Flower Grass by, you guessed it, strawberrymilk95, makes all the grass/hay on your farm flowers like pictured above around my coop’s pond. Not necessarily witchy, but I kind of have a thing for flowers so it was an instant add. Hojichas’ Wallpaper and Flooring, while not inherently witchy I do think they go well with the theme of the buildings & furniture. There’s almost a little something for everyone with this set, pinky cuteness, earthy wood, nice desaturated blues & greens. Then there’s Primitive Artisan Equipment by Ankokou, which is actually a brand new mod this month. I stumbled across while looking for any mods I may have missed for this post. They sold me with the cauldron-like oil maker.

These last two mods may be game-breaking or cheaty but bear with me because I totally justify them. CJB Cheats Menu by CJBok is exactly what it sounds like, but you don’t need to go overboard & use everything it so generously has to offer. The temptation is there but you get over it when you remind yourself these games are so boring if you don’t at the very least earn your currency. I use this mainly to teleport wherever I feel like it, even from my coop to my farmhouse because I’m a lazy sack of shit sometimes. I’m playing a witch in a videogame that I’ve played about three times since launch, there’s no way I’m walking around this town when I’m not looking for artifacts that drive me nuts. At first I tried to have different places “cost” different reagents, then just sap because I had so much of it, but eventually I gave up & the sap overran my chests. It’s fine. Anyway, the very last mod is Lookup Anything by Pathoschild because I was tired of alt-tabbing every 5min to the official wiki (I’m that gamer) but also because I’m a witch so I just like know things. See? Absolutely justified.

I was going to find a black cat mod because that’s the stereotypical familiar (& I have Miss Kitty IRL!) But uhh I named my cat Potato because Marnie blindsided me at 6am & I’m like trying real hard to embrace that plant based lifestyle. Do you think I missed any other mods you find crucial to your witchy playthrough? Are any of you playing a specialized farm? Am I supposed to wait for a respectable time to post blogs instead of at 3am when they’re realistically finished? I’m trying to engage with you, my viewers, is this engaging?